So water was the first workshop. Wow, I was hanging on Barent's (the instructor) every word. "Water will be the next major impetus for conflict; Australia is currently in the middle of a drought which has forced entire cities to move, the country to start recycling their sewage water, and start the process of desalination; It takes the water equivalent to 6 months of showers to make 1 pound of beef." All of these facts have such a direct effect on our immediate futures. What's more crazy is that all the changes are so simple and totally within reach of an average citizen.
There is so much information, these are the things that stuck with me....

My Toilets:
Leaks - I'm so glad I found out about this test, because we have 1 leaky toilet. To test for a leak, we were asked to drop some food coloring (I used some India ink) into our toilet tanks, to wait, and see if the coloring "leaked" into the bowl. Sure enough, it did. We are scheduled to change it this week. A leaky toilet can waste up to 200 gallons per day.
Lo flow toilets- This means 1.6 gallons per flush which is standard now. Luckily, we had all standard toilets. I think the old standard was over 3+ gallons, which is double! We are also practicing "If it's yellow, let it mellow. If it's brown, flush it down."

My shower:
Lo flow/hi pressure shower head - The concept behind this is like putting your thumb to a hose so that it sprays out, but with less water. So surprised that this was not a big deal for us taking a shower. We were still getting clean.
Turn off water while we shampooing and soaping - Our shower head also came with an on/off attachment which we hardly used until recently. It's not so bad now that it is summer and it seems at 2.2 gallons per minute, I am saving quite a few gallons. Also made me take a quicker shower.

My sinks and dishes:
Aerators - Same idea as the lo flow shower head. Already standard on all our bathroom and kitchen faucets, but we still need to do this on our garden hose. They are also like 2 bucks at the hardware store.
Do not use garbage disposal to throw away food. Scrape food off into the trash or compost. - This is so terrible because the disposal is what we are led to believe is the right thing, but that waste actually goes to the water treatment facility which then needs to filter out the food. We may try to start composting, but in the trash for now.
Operate the dishwasher when completely full- I don't have a functioning dishwasher, but I understand that it uses less water than washing by hand. This is also the case with our car - going to a car wash saves more water than washing it yourself. Absolutely fine by me!

My laundry:
Operate the laundry when completely full - It uses almost the same water and energy to do a smaller load.
Use only cold water to launder clothes - Today's laundry detergent is advanced enough to do the real cleaning. I tried this and my clothes were fine. I also started committing to doing laundry at night when it's less pressure on the energy grid. I also dried my t-shirts on a drying rack in the garage through the night. The rest of my clothes have been going in the dryer, but have been taking less number of minutes to dry therefore less energy. Kinda feels like a cool game at this point!

My garden (which doesn't really exist yet, but we are planning it now!)
Plant drought tolerant plants - I'm really excited about this one. I have a black thumb. But I am discovering through the Theodore Payne Foundation, that I can still have a garden of native plants meant for this Southern California desert!

A few more better habits:
Eat less beef - This was a surprising one. It takes water equivalent to 6 months of showers (12,009 gallons) to make 1 pound of beef! Crazy!
Allow frozen foods to thaw out in the refidgerator - rather than running them through hot water, which the way we did it growing up.
Use reusable water bottles - I bought us Siggs (I bought the one in the pic above), really fun aluminum water canteens. They aren't plastic so they won't make your water taste weird after it's been opened and sitting.

It's a bit of a hussle to do everything at first, but I always feel better after doing it.
Posted by emilyn at 10:04 AM 3 comments:
Labels: green living 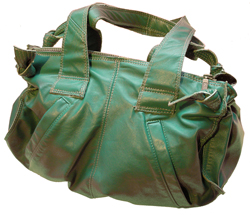 This recycled leather bag by Ashley Watson is gorgeous and brilliant. Her collection is made from old leather jackets. I thought I could never buy leather again, but now... Via Lena Corwin
Posted by emilyn at 4:40 AM 2 comments:
Labels: fashion, green living, recycled

Ahhh, my efforts to green the home... good, but a lot of time and research. I'm retraining myself out of what I learned in suburbia growing up. It was a comfy life in the OC (thanks mom and dad), but not enough awareness. Now I am creating cozy and aware. Right now it seems Santa Monica is my best resource. Walk around and they have the ideal California - beach, nature, sun, climate which also means they have the most to protect. I realize that this is one of the reasons why they are so forward about being green.

A few weeks ago I started a 6 week workshop with Sustainable Works in Santa Monica with my friend Sabine. It's one of the best things I've ever done. For those that think they are already being green, you have to take this workshop. It will take you to the next level in terms of tweaking your everyday habits. I'm happy that it's not about spending thousands for solar panels, even though we may just do that before the kitchen, but doing things like always doing laundry with cold water because the detergent does the cleaning, tinting our windows for more insulation, and eating less beef because it takes so much water to raise a cow. We recycle, turn off lights when we're not in the room, bring our reusable bags to the store, but there is so much more than that.

I'd like to document my progress. We were asked to take a life assessment survey at the beginning of the workshop and will be taking one at the end to get a sense of our progress and the difference it will make. I can't wait to see the numbers!
Posted by emilyn at 5:37 PM No comments:
Labels: green living 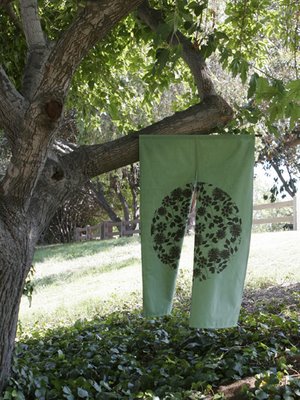 last week, sabine helped me photograph my norens and dish cloths properly! just uploaded them to the supercozy etsy shop.

Posted by emilyn at 2:06 PM No comments:
Labels: craft 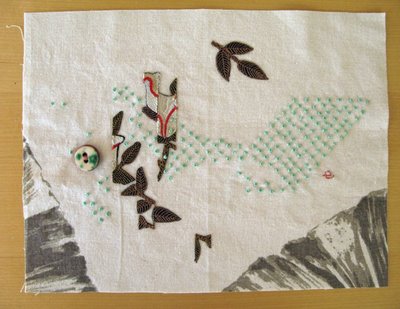 Having recently learned embroidery over at Make Workshop on my NY trip, I've been obsessed with the French knot - a delightfully graphic element for these little fiber collages I've been making.
Posted by emilyn at 10:52 AM 2 comments:
Labels: craft 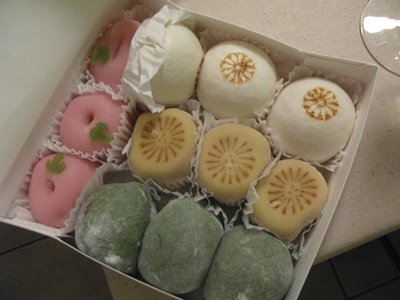 i have SO much to blog about - make workshop, sustainable works workshops, the new patio, the new bathroom, how much i hate home depot, art fridays, the barnsdall art sale.....!!! but, alas, i have not enough time in the day (sigh!), so i offer the beautiful mochi adam brought over for dinner last week....

Posted by emilyn at 3:47 PM No comments: 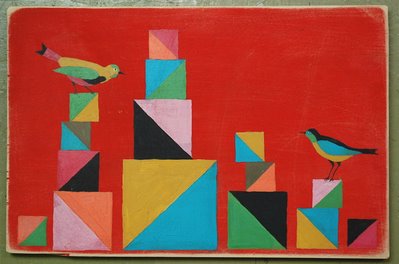 LOVING Lisa Congdon's new work! These pieces are for her upcoming show The Tenderhearted, which opens September 6 in SF. 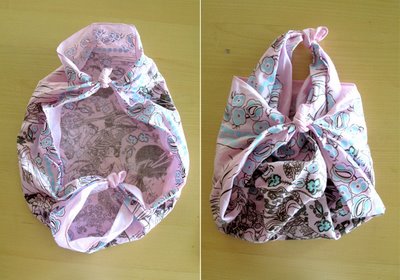 I was inspired to share the furoshiki purse Yuka taught me how to make when I saw this post on AT:LA.
This one is made from a square bandana Yuka brought me back from Japan. 1) Tie parallel corners together 2) and then pull the knot of one side through the opposite side opening. You now have a little wristlet!
Sometimes I will use a larger piece of cloth to carry a few groceries home from the store.
Posted by emilyn at 5:06 PM No comments:
Labels: craft
Newer Posts Older Posts Home
Subscribe to: Posts (Atom)