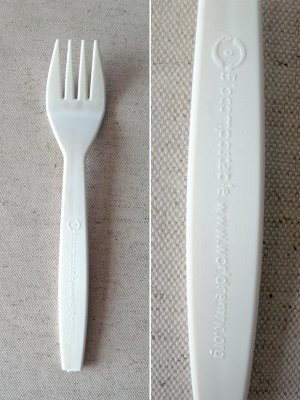 This is the most amazing fork. It is made of corn starch and will start bio-degrading in about 2 months. It was this fork coupled with plates and cups that were also compostable that made the Taste of the Nation fundraiser a near ideal event for us foodies. It's impressive that almost all the waste for the event could be composted or recycled. Restaurants were also encouraged to only bring reusable containers.
To bring a deeper purpose to our eating habits this year, we attended this spectacular food tasting fundraiser held by LA's fine food establishments to end childhood hunger all over the nation. I was shocked at the fact that there are over 200,000 children, just children alone, that go hungry in Los Angeles every day. It's a pricey $95 ticket, but for an important cause and totally tax deductable.
This was the place to be for an overview of LA's fanciests restaurants. The portions were huge for a "taste" and head chefs could be seen dishing out their best summer recipes. Ask anyone serving to describe their dish and it's a detailed, colorful description of a masterpiece. Among my favorites was AOC's shrimp ceviche with sour orange mojo, Providence's chilled summer melon soup with serano ham espuma (i think this is the lard), spit roasted lamb from Grace, and the avocado and three corn salad from Border Grill/Ciudad.
The live auction's highest prize was fun to watch, and I emphasize watch only, as an older business man and a younger wallpaper mag-styled man bid back an forth to see who would soon be the most popular guy amongst his friends. The coveted prize was a private dinner prepared by chefs Mary Sue Milliken and Susan Feniger, who nursed each bidder during the process, for you and 20 of your closest friends on the helicopter pad of U.S. Bank, the top of the tallest building in dowtown LA. The winner.. the older gentleman and his lovely wife.
Posted by emilyn at 1:24 PM No comments:
Labels: green living 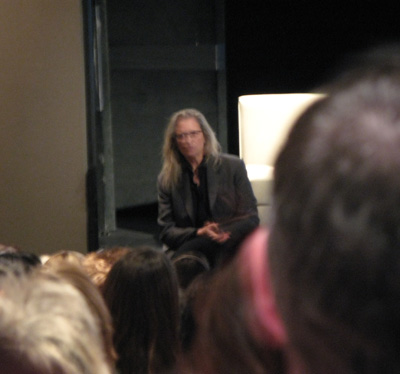 It was my priviledge to hear and see photographer Annie Leibowitz speak at Art Center College last Thursday. A very simple person with blonde flowing hair and no makeup, it was obvious that she'd rather share her images than speak in front of an audience. After being introduced by her close colleague, photographer, Matthew Rolston, she chose to sit on the edge of the stage prefering to blend in with the black painted floor rather than on the cushy lounge chair prepared for her.
She spoke about her new book Annie Leibovitz: A Photographer's Life, 1990–2005 which visually chronicles her professional, but more importantly, a good portion of her personal life. She spoke about the artistic side of her work as well as about the ease of photographing the people we know best often because they are most comfortable with us, in her case, her mother. She shared photgraphs of her most heart-wrenching year during which her longtime partner write/journalist Susan Sontag and Annie's own father pass away within 6 weeks of each other. Annie documents their last days and their bodies after death. In this bitter sweet time, her twins were born.
No booksigning at the end, but felt the slight wind only a few feet away as Annie was quickly wisked away to her private car.
ps. thanks sabine for the heads up!
Posted by emilyn at 12:37 PM No comments:

...Because it's all about hair 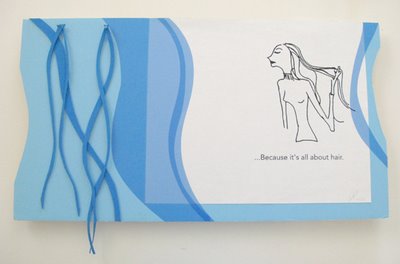 Some days there is nothing better than quotes like this to keep us in perspective. One of J. Lo's earlier pieces. Fabulous!
Posted by emilyn at 1:06 PM No comments: 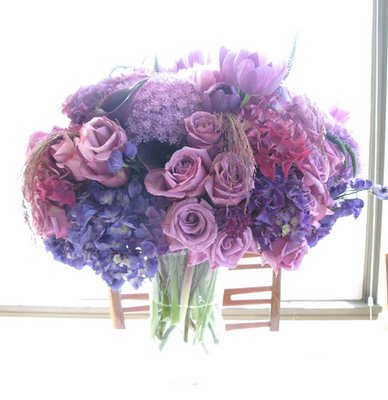 Went to one of the those Martha Stewart events cosponsored with Loreal Paris store at the Beverly Center with my friend Yuka today and won this gorgeous bouquet in a raffel. I've never seen anything quite so decadent. There must be at least 50 flowers in here and it's smells amazing! Lucky me!
update 6-27-07: having to separate out the flowers now because their slowly wilting in the summer heat and have counted 42 roses bring it a grand total of 104 flowers.... and this was proabably one of the smaller bouquets! wild.
Posted by emilyn at 11:46 PM No comments: 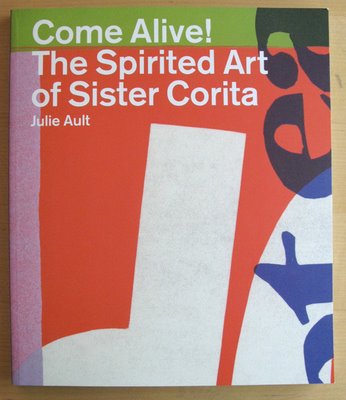 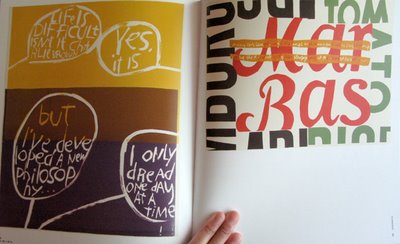 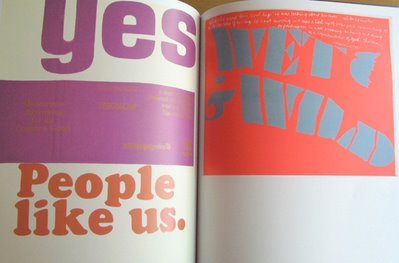 Sister Corita Kent has been an inspiration since I saw her original serigraphs all along the staircase of the loft I used to rent at my dear friend Maxine's house. I loved the colors combos, the freeflowing style, the message, the fact that she was a rebel nun! Maxine was a student of Corita's back in the day and had a great collection of her work. Tonight I found time to read the latest book about Sister Corita purchased from the Hammer the night we were there for the KCRW party. Also found these Art Department Rules to be good ones to live by. I wish I knew #8 earlier! It's so true!
IMMACULATE HEART COLLEGE
Art Department Rules

Rule 1: FIND A PLACE YOU TRUST AND TRY TRUSTING IT FOR A WHILE Rule 2: GENERAL DUTIES OF A STUDENT: PULL EVERYTHING OUT OF YOUR TEACHER, PULL EVERYTHING OUT OF YOUR FELLOW STUDENTS Rule 3: GENERAL DUTIES OF A TEACHER: PULL EVERYTHING OUT OF YOUR STUDENTS Rule 4: CONSIDER EVERYTHING AS AN EXPERIMENT Rule 5: BE SELF DISCIPLINED. THIS MEANS FINDING SOMEONE WISE OR SMART AND CHOOSING TO FOLLOW THEM. TO BE DISCIPLINED IS TO FOLLOW IN A GOOD WAY. TO BE SELF DISCIPLINED IS TO FOLLOW IN A BETTER WAY. Rule 6: NOTHING IS A MISTAKE. THERE IS NO WIN AND NO FAIL. THERE IS ONLY MAKE. Rule 7: THE ONLY RULE IS WORK. IF YOU WORK, IT WILL LEAD TO SOMETHING. IT’S THE PEOPLE WHO DO ALL OF THE WORK ALL OF THE TIME WHO EVENTUALLY CATCH ON TO THINGS. Rule 8: DON’T TRY TO CREATE AND ANALYSE AT THE SAME TIME. THEY ARE DIFFERENT PROCESSES. Rule 9: BE HAPPY WHENEVER YOU MANAGE IT. ENJOY YOURSELF. IT’S LIGHTER THAN YOU THINK. Rule 10: WE’RE BREAKING ALL THE RULES INCLUDING OUR OWN AND HOW DO WE DO THAT? BY LEAVING PLENTY OF ROOM FOR X QUANTITIES. – JOHN CAGE

Helpful Hints: ALWAYS BE AROUND. COME OR GO TO EVERYTHING. ALWAYS GO TO CLASSES. READ EVERYTHING YOU CAN GET YOUR HANDS ON. LOOK AT MOVIES CAREFULLY, OFTEN. SAVE EVERYTHING – IT MIGHT COME HANDY LATER.
THERE WILL BE NEW RULES NEXT WEEK! - Sister Corita Kent
Posted by emilyn at 10:47 PM 1 comment: 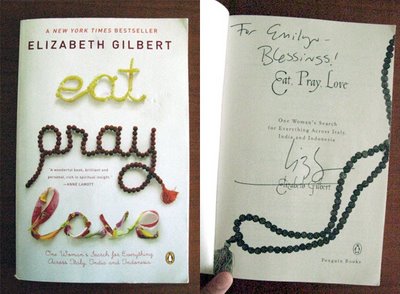 Love Elizabeth Gilbert. After attending her booksigning this past Monday night at Vroman's bookstore, I want to be her best friend in a non-stalker kind of way. She was funny, articulate, sincere, down to earth, well travelled, always humbled, and a wonderful storyteller making her everything you want out of an amazing dinner guest. Her book is Eat, Pray, Love, a title I was immediately attracted to for the reason that it was describing my life in a nutshell. I mentioned this to her as she was "blessing" my book (because I could!) and she responded by attributing the title and beautiful cover art to be a huge reason for the book's extensive success (hooray for graphic designers!). A few other things she revealed -- she and Felipe are married (!!) AND her next book is will be about marriage making it sort of a part 2 of Eat, Pray, Love. I can't wait.
Posted by emilyn at 12:27 PM 1 comment: 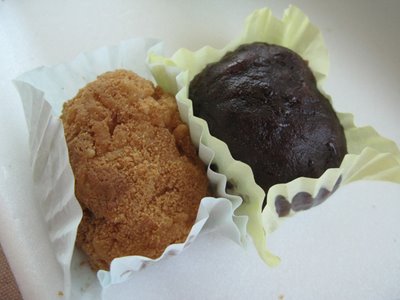 Homemade ohagi Mama brought over today for our bbq. Not an easy thing to make...

Posted by emilyn at 7:14 PM No comments: 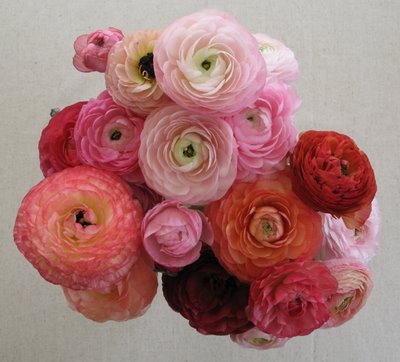 I love yoga. It almost always calms me and rejuvinates my body. I really enjoyed this loving-kindness meditation today. I closed my eyes, brought awareness to my breath, and then in my head, repeated these simple words for myself and then a few more times for friends and family I thought could use some good karma sent to them right about now.
May I be safe
May I be happy
May I be healthy
May I live at ease
Quite soothing after a long day.
Posted by emilyn at 9:53 PM No comments: 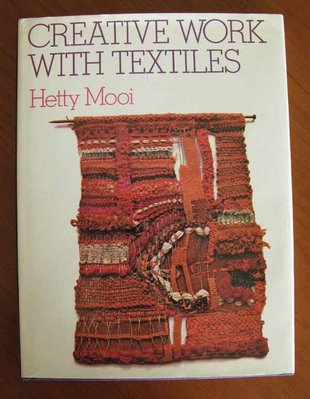 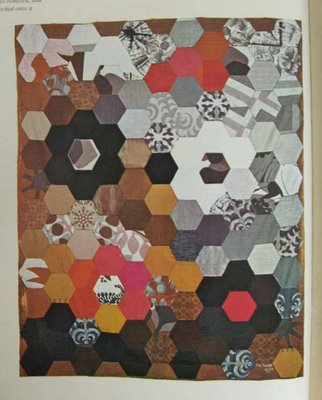 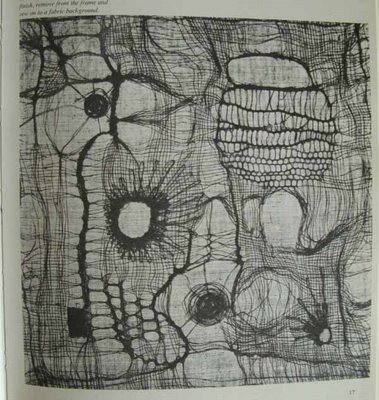 A great textiles book I found at my local used book store. I love her Dutch name Hetti Mooi.
Posted by emilyn at 10:03 AM No comments:
Labels: craft, textiles 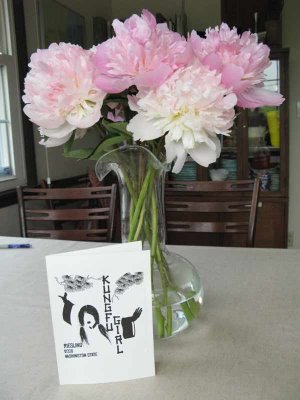 Cute card I made with the Kung Fu Girl wine label, a 2006 riesling from K Vintners. Remove a wine label in 5 minutes by steaming it off with a cappuccino machine steamer; OR fill the consumed bottle with hot water, submerge the entire bottle in an bucket full of more hot water and then after 1-6 hours (depending on label, adhesive, etc.) watch it peel away and float off. Thanks Martha.
Also had to include the peonies I bought from Trader Joes this past weekend. Peonies, which you can compare to bird of paradise here, grow like crazy in Washington state. Lucky them, and us for that matter.
Posted by emilyn at 11:07 AM No comments: 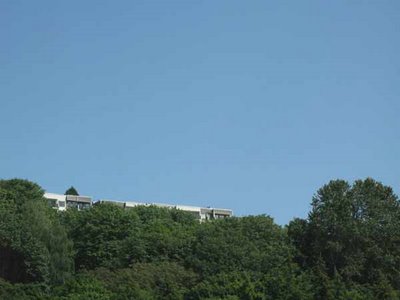 I leave you with my last image of Seattle which I describe as "blue, blue, blue" and "green, green green." That's all you see because there is no sign of smog and you always have the rain to clean things up for you. A friend described how she amazed she was by how many shades of green you could see in one place. Totally worth the visit.

Posted by emilyn at 9:50 PM No comments:

While in Walla Walla, we stayed at the Monteillet Fromagerie, a cheese farm set in the middle of green rolling hills, blue skies, serene silence, and fresh clean air. The lovely and lively owners Joan and Jean Pierre Monteillet have been farming there for years, with Joan having grown in Walla Walla. Surrounding the house is the farm for the very sheep and goats that make the milk for their cheese. It take 5 gallons of goats milk to make this little round of cheese - yes, 5 gallons! So they were a good reminder of how much we should appreciate our food. 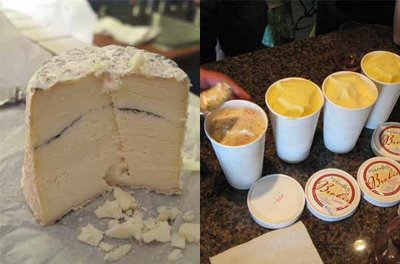 Larzac goat cheese with a thin line of vegetable ash through the center; their new line of sorbets including a Riesling infused sorbet - light, refereshing and perfect for summer, it's to die for. 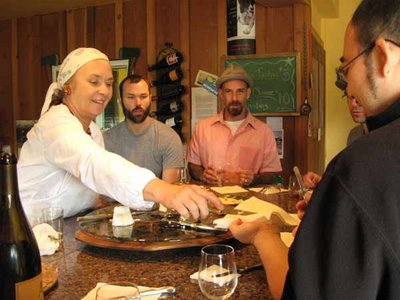 Joan at her tasting room. 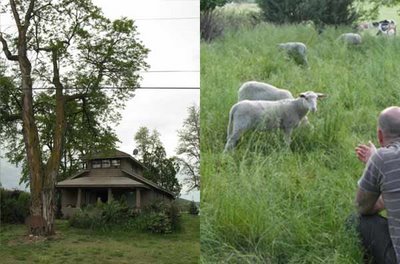 The guest house we stayed at. One can rent the 3 bedroom house for a wonderful weekend. 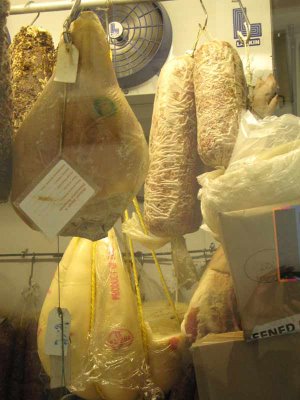 Even though I am only a partime carnivore (does that count?!), I love this image shot at Salumi, Mario Batali's father's deli in Seattle. Check out the pig's hoof in the top right. (Sorry veggie friends :() Amazing slices of full flavored meat not to be missed out on when in Seattle.